Paul “Pete” Dye, born December 29, 1925 in Urbana, Ohio, to Paul and Elizabeth Dye, is a legend in the field of golf course design and construction throughout the expanding world of golf.

Considered in many circles to be the most influential golf course architect of the last five decades, Pete is now in his 80’s and still designing golf courses. Pete comes by his career naturally. His father designed and built a nine-hole golf course on his mother’s farm in Urbana, Ohio, and Pete grew up playing and working on this course. He won the Ohio State High School Championship and was medalist in the Ohio State Amateur.

World War II interrupted his high school education and Pete served in the 82nd Airborne Infantry of the United States Army. Upon his discharge, he attended Rollins College where he met Alice O’Neal.

Alice and Pete were married in 1950 and Pete moved to Indianapolis where he became a star salesman for The Connecticut Mutual Life Insurance Company. Before he was thirty years old, Pete was one of the few Midwest members of the Million Dollar Round Table. During this time, he was also pursuing his golf career and won the 1958 Indiana State Amateur Championship after a runner-up finish in 1954 and 1955. He also won the Indianapolis District Championship, participated in The Western Amateur and five USGA Amateurs, and played in the 1957 United States Open where he finished ahead of both Arnold Palmer and Jack Nicklaus.

Pete served as Greens Chairman at the Country Club of Indianapolis for about eight years. His interest in course maintenance continued and Pete began attending turf sessions at Purdue University under Dr. William Daniel. While his front yard on Kenwood Avenue grew into a hayfield, the sometimes-impatient members of the Country Club of Indianapolis suffered through his learning of agronomy and golf course architecture.

Although he was a champion golfer, Pete’s interest was really in the design and maintenance of a golf course. He decided to leave the life insurance business to devote his time to designing and building golf courses. Supporting the career change and partnering with him in the new venture, Alice accompanied Pete on a visit to noted golf course architect Bill Diddle in his log cabin at Woodland Country Club. Mr. Diddle was not too encouraging about the economic rewards of the golf course architecture profession. Undaunted, Pete and Alice pursued and began by building a nine hole course just south of Indianapolis called El Dorado, now titled Royal Oak Country Club. Accomplishing this feat, they built their first 18-hole course, Heather Hills, now named Maple Creek Country Club.

A 1963 trip to Scotland profoundly impacted Pete’s subsequent designs. Touring the great Scottish courses, he was influenced by the features he saw – small greens, pot bunkers, undulating fairways and wooden bulkheads. He began incorporating these concepts into his designs. This, in turn, influenced future golf architects and Pete has been hailed as the father of modern golf course architecture.

In naming him the 1994 Golf Course Architect of the Year, Golf World magazine said: “The Pete Dye influence was everywhere in 1994, from the railroad ties used in household landscaping to the island greens that serve as targets at your local driving range.” Pete Dye has perfected the art of multiple tee placements that make each hole he designs a challenge for the finest players in the world and yet thoroughly playable and enjoyable for the average golfer.

Pete is also acclaimed for his innovative, environmentally friendly designs that encourage natural flora and fauna and protect surrounding lands and waters from the herbicides and pesticides necessary on greens and fairways. He lent his expertise in the renovation of the Kampen Course of Purdue University’s Brick Boilermaker Golf Complex. The Kampen Course incorporates Pete’s drainage and irrigation designs and wetlands areas that help recycle and purify water that drains onto the course. The course additionally serves as a living laboratory, combining turfgrass research and environmental studies.

Dye courses frequently host events on the various professional tours and major amateur tournaments. Recently, ten of his courses were included in a national magazine’s list of the top 100 in the nation. In 1991, the Ryder Cup matches, the USGA Amateur, the USGA Mid Amateur, and the PGA Championship all were played on Dye courses. His PGA West hosted the Skins Game for five years running.

Mr. Dye’s autobiography, Bury Me in a Pot Bunker, was published in 1994 and was co-authored by Mark Shaw, a Purdue alumnus.

Pete Dye and the transformation of North Course into Kampen Course In 1994, famed golf course architect Pete Dye walked what was the North Course of the Purdue University Golf Courses. His goal was to come up with possible changes that could be made due to an upcoming road construction project. Dye’s plan became much more than a simple renovation. His personal goal was to produce a golf course that would be both a challenge to the collegiate golfer and act as a classroom for the students of Purdue.

With Mr. Dye on board, fundraising began and in the fall of 1996 Pete, Superintendent Jim Scott and 32 Purdue students began the construction. The departments of Forestry, Entomology, Water Quality Testing, Agronomy and other schools at Purdue all became involved. This was a very unique situation, as Mr. Dye did not use his normal crew. The course design includes a water reclamation process – all of the water is recycled.

The result is the Kampen Course, a unique links-style layout with strategically placed waste bunkers, native grasslands, man-made wetlands and large greens. Measuring over 7,400 yards from the championship tees and 5,300 from the forward tees, it’s a true test of golf for all players.

The course is named in honor of Emerson Kampen for his support of Purdue Athletics. Mr. Kampen’s statue overlooks the first tee. 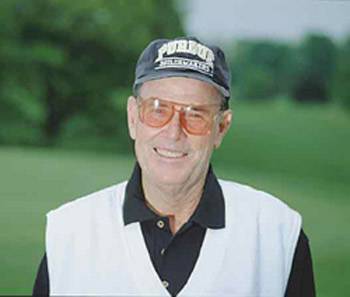 “As a person who calls Indiana home, I am very pleased to have had the opportunity to build two of the finest university golf courses in the country at Purdue.”